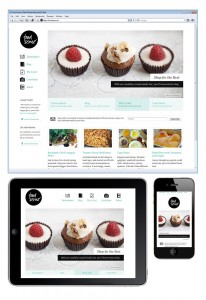 Many people use the terms Responsive Design and Adaptive Design interchangeably, but creating a distinction between them does help clarify two different approaches to the modern challenge of designing web pages that work on small and large screens.

In the world of web design, the only thing harder than keeping up with the ever-evolving standards in HTML, CSS, and other technologies, is keeping up with the vocabulary. This article is about helping you understand what responsive and adaptive design mean, and how these approaches differ.

Many approaches to mobile web design

When people first started using mobile phones to connect to websites, many of us created special versions of our sites specifically optimized to work only on small mobile devices. Today, some sites still use this approach, creating one simple mobile site for visitors with cell phones and directing everyone else to the main desktop website.

As mobile devices have become “smarter,” two new approaches to designing for small and large screens have become popular — adaptive and responsive design.

Adaptive design was developed to meet the diverse needs of a growing number of cell phones with different capabilities and screen sizes. Adaptive design requires that you create many different versions of each web page, and install complicated programming on your web server that detects each device and delivers a version of the site optimized for the specific size and features of that cell phone visitor. Adaptive design is complicated, expensive, and generally used only by large, well-financed websites.

Fortunately, a new, simpler approach called responsive design is quickly gaining popularity. With responsive design, you create one web page and then use multiple sets of CSS rules to change the format and layout based on the size of the browser window.

What Responsive and Adaptive web design have in common

First, what they have in common. Both responsive and adaptive web design are essentially about creating web designs that are optimized for the size of the screen or the type of device that is used to view them.

The basic concept is that you create a website that works on multiple screen sizes, most commonly to work well on at least three different screen sizes — a small mobile screen, a tablet-sized screen, and a larger desktop computer monitor.

Okay, so what’s the difference between responsive and adaptive web design?

The simplest and most common way I’ve seen these terms compared is:

Why choose responsive design instead of adaptive design? 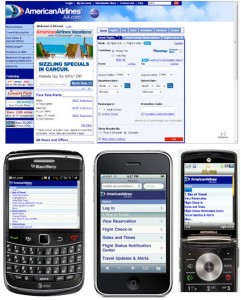 American Airlines is an example of Adaptive web design.

The simple answer is that adaptive design is a lot more complex, and expensive, but it’s the only way to reach the broadest mobile audience. That’s because responsive design using CSS media queries, a relatively recent technology that is not supported by real old or limited mobile phones.

If you’re working on a website like the one at American Airlines and you need to develop a highly interactive, secure site that works for everyone who might ever visit your site with any type of mobile device, then you have to create an adaptive design. Ideally, you also have a big team of developers and the budget to handle the complexity of such a site.

Most designers today are chooing responsive design. Not only because it’s cheaper and easier, but because it’s so much more efficient to create one design that adjusts to different screen sizes than to create many designs optimized for all the different phones that exist now, as well as all of the new phones and devices that will come out in the future.

We’re not designing for phones and laptops and desktop computers anymore. Websites are being displayed on giant television screens, and soon we’ll be surfing with Google’ new glasses (called Google Glass) and who knows what else…

But don’t you care about people with older mobile phones?

If you’re asking that question, I applaud your desire to reach the broadest audience. It’s unfortunate that responsive websites don’t work on really old or really limited mobile phones.

I definitely care, and if you’re working in emerging markets, including parts of Africa, Asia, or Latin America where smart phones are not as common, you should care — a lot. In that case, I recommend you create an adaptive website if you have the resources. If you can’t afford that option, consider designing one, very simple mobile-friendly site. You’ll have to limit the features, but at least it will be accessible to everyone in your audience.

For those of us who are designing websites for the United States, or other more developed markets where smart phones and tablets are common, responsive design is increasingly the preferred option — not only because so many people use high-end mobile devices, but because the few people who are still using old, really limited cell phones don’t spend much time surfing the web. Seriously, the traffic to websites with really old or limited cell phones in most developed countries is so small it’s just not worth worrying about for most designers.

In case you haven’t tried it, surfing the web when all you have is a tiny, two-color screen and a phone number keypad is not much fun so most people with such limited devices don’t bother.

The technical details of Responsive and Adaptive design

Adaptive design requires a device detection script that runs on the web server, as well as multiple versions of the site, generally created dynamically by drawing content out of a database and displaying it through a number of templates, optimized for each device. In the case of adaptive designs, if you visit a website with a mobile device you may see a very different version of the site than if you visit the page with a desktop computer.

Best of both worlds: The Boston Globe is a great example of a site that is responsive, but also uses a little server-side programming to remove elements, such as large images and videos, when the pages are displayed on small screens and cell phones with limited features. You’ll find a well-written case study on how the responsive design for the Boston Globe was created at http://upstatement.com/blog/2012/01/how-to-approach-a-responsive-design/.

A little history and credit for Adaptive and Responsive Design

The term Adaptive Design has been around a lot longer, but some give credit for this term to Aaron Gustafson who wrote a book called Adaptive Design.

Another terms get tossed around when we talk about mobile design “Mobile First.”

Luke Wroblewski deserves credit for the term Mobile First, which means designing the mobile version of a site before you design the larger, desktop version (historically most sites were designed the other way around).

11 comments on “What’s the difference between adaptive and responsive web design?”